What Do You Mean, “For Decoration Only”???

The blighted weatherman left the air conditioning on outside, and it got all cold last night. So we kits decided to make the most of this dreadful situation and turn it into something constructive, otherwise known as Sleeping In.

Now, everyone [in their right mind] knows that to sleep in properly, one must have all the right elements: viz. a soft but sturdy surface (this can be a bed, sofa, chair or other elevated but comfy locale), an assortment of fluffy pillows (preferably with fuzzy covers), and last but not least, a nice warm blankie (and if there is one thing in ample supply around here, it is comfy surfaces, fuzzy pillows and warm blankies)!
And everyone [who is not waiting on fellows in white coats to carry them off in a plain van] understands that in a situation as desperate as ours (i.e. a household of many kits of varying shapes and sizes), one must nab the best spot as soon as feasibly possible, immediately following breakfast, or one may find said spot pre-occupied.

So it was to this end that I sought, and discovered, a most delightful find – one EMPTY (read: Cat-Free) sofa, piled to the max with pillows in as many shapes and textures as we cats, and to top it all off, the Piece de Resistance, if you will: one singularly attractive (like me), fuzzy (like me) BLANKET!
I was in heaven.

And amazement that I alone had this scene of winter tranquility in which to snooze the day away.
Aaaaaahhhhh……

….turned in to Agggghhhhhh!!!! As Mummy discovered my whereabouts shortly after I had settled in and begun my blissful drift off to dreamland.

Next thing I know, I am being unceremoniously dumped on the ice-cold tiles, wondering who I was, where I was and whodunit! Then she rants about Expensive Wool (never heard of him) and Decoration (I know what this is but am hard pressed to relate it to sleep gear). Not having the clearest head most of the time, in my present half-awakened state I was unable to grasp much of the conversation, catching mere strains of “just for kitties to look at” and other such nonsense (I mean to say, who wants to sit and merely stare at pillows?). Then I found myself being scooped up and toted off like a bag of apples to the bedroom. Once there, Mummy laid me on the [reasonably cozy] down comforter and tucked a [plausibly soft] feather pillow beneath my head. As I drifted off, I felt a warm cotton blankie being pulled over me. Ahhhhhzzzzzzz….

What was I speaking about?

I have completely forgotten.

If it comes to mind, I will most certainly write it down. In the meantime, I am off to the living room to scout out a snoozly spot before dinner time… 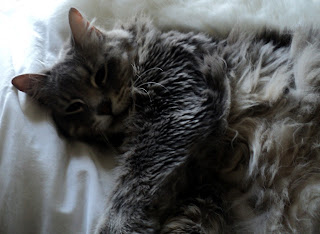 Posted by gussiegrey at 12:50 PM No comments:

Mummy announced today that I am no longer Man of the House.

She says it is because I have taken up a bit of a habit of yelling at her when I don’t get my way, say in getting my drink from the faucet in a timely manner.

Well…what is wrong with having your drinks on time, say I?

And when Mummy fails to be forthcoming with the drinks, what is wrong with a little verbal reminder?

Speaking of time, Mummy had the audacity to change all the clocks in the house this past Sunday, so now we poor little kits are getting our meals an hour LATER! What sort of rot is this? She says it was not she who changed the time but I saw her do it with my own lovely green eyes.

She isn’t fooling me.

So I am forced to be a bit demanding of late, insistent that she not let the standards drop even if she cannot keep time straight. If she wants to change time [and claim it was some invisible third party], that is alright by me, provided she gets up an hour earlier to compensate. To ensure this, I have been practicing my “alarm clock” technique:

Say what she will, this method is extremely effective. She gets up (eventually) and dutifully, if begrudgingly, doles out the foodstuffs. But this morning she said she had had enough of my cantankerousness (talk about the pot calling the kettle black!) and stated emphatically that I was no longer Man of the House until such time as I straightened up my cattitude.

I am sure I don’t know what she means.
Posted by gussiegrey at 9:02 PM No comments:

Guardian of The Tray

We were enjoying breakfast in bed, replete with tea and Mummy’s apple pancakes, maple syrup, crisp-tender bacon, buttery eggs with parmesan – YUM! Uh, where was I?

Oh yes – we were enjoying breakfast in bed when Young Mosby got the bright idea that he was invited to the feast – the hound! Mummy and Dad both told him “No! Get back!” and “This is Augustus’ breakfast!” (Well, they didn’t actually SAY that part - it was implicit) but little Mosby simply would not listen.

After watching his belligerent behavior (and observing Mummy pushing him back repeatedly with her paw to no avail), I decided to take matters in hand: I rolled over to get into a better position for KP (Kitten Patrol), and as soon as he lunged toward the tray again, I impeded his progress with one of my great paws, thinking surely this was sufficient to teach him a lesson.

But back he came, repeatedly!

After several attempts at being nice, I finally had enough of this young squirt!

Mosby advanced toward the tea tray one last time….I crouched and made ready.

He inched forward, keeping one eye cocked my direction but not making any sudden moves. I lowered my head; he reached his teensy foot out, and that was the last straw as They say (who “They” are I don’t know - Mummy speaks of them often). I swooped down, pinning him to the bed.  He squiggled for a bit then lay still. Mummy and Dad said what a good thing I did, guarding the tea tray like that.

Mosby fell asleep, and I went back to looking cute, waiting for my plate.

I s’pose, as official Guardian of the Tray, I should think about getting a uniform.
I wonder what color?
Gray, I think.
Yup, gray it is!
Posted by gussiegrey at 6:43 PM No comments: