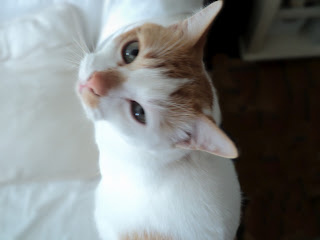 Has anyone ever noticed that there is only one letter difference between the words “Friend” and “Fiend”? I have lots of friends, but Poppet is just a plain old FIEND! He stole my gold string that I was playing with a few minutes ago. I was being very clever, entertaining Mummy (she gets bored easily) by bringing the string to her and letting her toss it over my head so that I have to flip over and try to catch it (which I never manage to do but that is not germane to the matter). Anyways, Mummy tossed the string, I tried to catch it, missed [for some odd reason] and when I turned to chase after it, the blighter Poppet had snagged it and was running fast as his little twig legs would carry him! I was astonished (truly!), my eyes wide and mouth gaped; Mummy demanded Poppet bring it back but he wouldn’t listen [there is no reasoning with Fiends - I could have told her] so Mummy had to track him down. When she caught up with the bounder, he was in some dark recess, holding the string in his teeth and glowering. Mummy demanded the string, Poppet released it, then Mummy gave him a proper scolding about Manners (where have I heard that before??). I got my string back and let Mummy play with it again, just because I know it makes her day. J
Everything worked out but I think there ought to be a law against fiends. I am going to petition the management and see how it fares. These political activisms take time so I may not have much to report for a while but rest assured, I will lobby until the cats come home (Mummy says cows. Can’t think why it should be cows. Who wants cows in the house? Cats, then) so that one day I will have a peaceful, fiend-free living room.
Wish me luck!
Posted by gussiegrey at 10:14 AM