I looked out the kitchen window today (Tippy wasn't around, thank goodness!), and guess what I saw??

Mummy was on the deck playing with some little fuzzy creatures that made silly mewing noises [they were very clumsy, too, not graceful like me]! Mummy had said she was just going out to check on something but it turned out she was playing with these Things.
You should have seen the way she was loving on them and cuddling them and stuff.  I got jealous and put on my most pathetic face in hope she would notice and come back to me.
She eventually looked my way so I squinted and pouted. I think it worked because she came back in; I told her how I felt about all this betrayal (a guy has to stand up for himself, you know). She said she loved me so much more than those things and that she was only making sure they were healthy. She said she was going to send them to someone else's home to live.
But I said she didn't need to make such a great show of checking their vitals. Mummy called me an old silly and kissed me on my head - uggh! I don't trust those 'things'; I've heard tales about ocurrences like this. Parents play tough but the little creatures make cute faces and are all fuzzy and sweet, then parents fall for them and let them stick around; and somehow they turn into cats!

We have cats already.

That's all we need - more cats in the house!

Then they will take over Mummy's and Daddy's lives and they won't love me anymore. That's it; I have to do something to put a stop to this nonsense before it is too late.
But what? 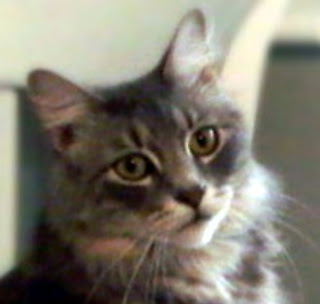